A Symbolic Exercise for Second Graders 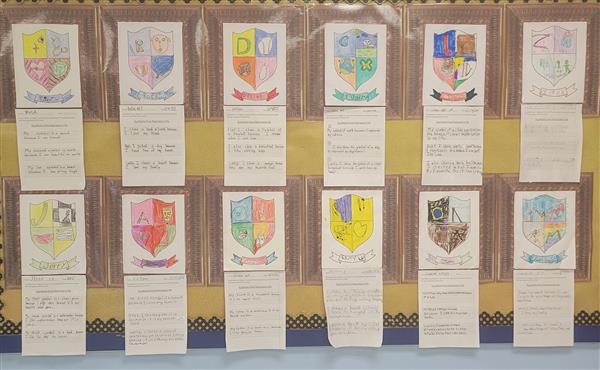 A Symbolic Exercise for Second Graders

Most of us don’t have a family crest. But that doesn’t mean we can’t create one! The students in four of CET’s second grade classes recently made their own personal crests that really speak to who they are. Each crest is divided into four parts, and students drew symbols in each quadrant to represent what’s important to them.

Mrs. Birney, Mrs. Deacy, Mrs. Jacobi, and Ms. Burke’s classes participated in making the crests. Second grade teacher Jenna Jacobi says the students “created personal crests by identifying what they value as an individual and applying their knowledge of symbolism from our social studies citizenship unit. Students developed a set of symbols that best represents who they are and what they value.”

For example, Valentina drew a pair of glasses to represent school because she loves her teacher, a paint brush because she loves art, a fox jumping to show she’s strong and brave, and the letter V for her first initial. Clyde drew a slice of pizza because “it tastes like a sensation,” a soccer ball because he likes to play, the mountains because he likes to hike with his family, and the letter C for Clyde.

The creation of the crests is a project that supports the new House System at CET. The House System divides kids and teachers into eight houses throughout a student’s elementary school career. Each house is represented by a letter in the word REACHING and has about 70 students;  each meets  monthly to promote multi-age, multi-grade connections among students and faculty. The idea is to give children a sense of belonging and purpose throughout their years at CET. (For more information on the House System, please visit the school website where there is an excellent video explaining the program. https://www.chufsd.org/house_system)

The crests are a creative and interesting way for kids to reveal something about themselves as they grow connections within the House system. And they’re a way for students to consider what really matters to them, in the context of the social studies curriculum.

The second graders at CET have been learning that crests have been around since ancient times, and they were often worn by knights in tournaments, sometimes in battle. A family crest, or a Coat of Arms, is a symbol of a particular family that was passed down from one generation to the next. They were fairly rare as they were mostly used by European nobility from the 11th to 17h centuries. Crests often included a lion, tiger, horse or other animal, and some of the CET students included animals in their designs.

You can view the crests hanging in the hallways of the second-grade wing. And if you have a second grader, you just might have to hang one in a hallway of your own home.